Chess Championship Match to be broadcast in VR 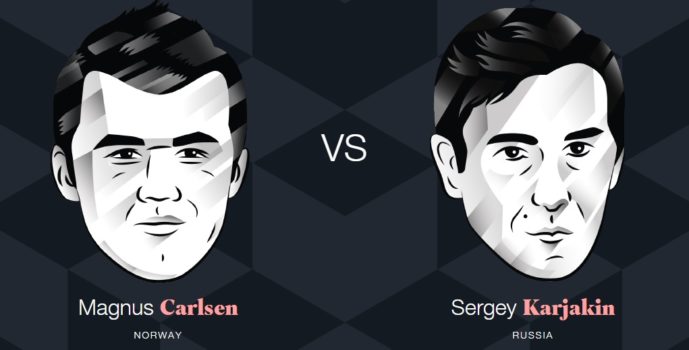 Press release: The World Chess Championship Match 2016 to become the first of any sportÂ to be broadcast in 360-degree Virtual Reality

The World Chess Championship Match, to take place in New York in November of 2016, is to be broadcast live in 360-degree virtual reality, a global firstÂ for any sport.

The virtual realityÂ broadcast of the match, which will take place between Magnus CarlsenÂ of Norway and his challenger Sergey Karjakin of Russia, will be exclusivelyÂ available through Worldchess.com.

â€œWe areÂ proud to announce that chess, one of the oldest sports in the world, isÂ creating a global first — a totally new and immersive way of watching aÂ contest that will captivate hundreds of millions of new and existingÂ fans,” saidÂ Ilya Merenzon, the Chief Executive of World Chess by Agon Ltd, theÂ commercial rights holder to the World Chess Championship.

World Chess has teamed up with Livestream to create the unprecedentedÂ viewer experience that will place the audience closer to the action thanÂ ever before.

As well as the 360-degree video stream there will be a number of other camerasÂ within the playersâ€™ arena to provide multiple angles on the match.

The online broadcast will include commentary in multiple languages, withÂ guest appearances from celebrity chess fans, a chess analysis engine soÂ viewers can gain an insight into the playersâ€™ strategic decisions, as wellÂ as a host of other features.

â€œEverything we are doing is designed to enable viewers to get into theÂ minds of the players,” said Merenzon. “This is the first Chess World Championship for theÂ smartphone generation.”

Livestream, the leading provider of live video services, is theÂ broadcasting partner of the Championship Match.

â€œWe are excited to be the streamingÂ partner for the World Chess Championship at a time when the broadcast andÂ overall presentation of the game is being transformed by Agon,” said aÂ spokesperson for Livestream.

Chess fans can sign up to receive the VR broadcast by registering atÂ www.worldchess.com. A season pass for the 12 round Championship Match willÂ cost $15, or $1.25 per game. The pay-per-view model with advanced premiumÂ features, such as full 360-degree broadcast, is expected to significantlyÂ add to the commercial prospects of chess as a global sport and increase its
appeal to brand partners.

A basic free live broadcast of the Championship Match will also beÂ available to view. It will include a live representation of the game andÂ will be made available to select broadcasting partners and chessÂ federations that agree to join the World Chess affiliate program.

â€œWe are investing into the 360-degree broadcast becauseÂ we believe that it is a major commercial opportunity for a sport which hasÂ required additional revenue streams to fulfill its global potential,” said Merenzon. “The millions of dollars in extra revenue that our new model will bring intoÂ the game will be re-invested in player prize money, events in the World
Chess Championship cycle and in grass roots initiatives.Â But we also want to ensure that as many people as possible can follow theÂ Match and recognize that not everyone is prepared to pay to follow theÂ Championship Match – thatâ€™s why we will offer a free broadcast as well.â€

The 360-degree virtual reality broadcast will be available to view by anyoneÂ with a smartphone, tablet or computer or VR device.

â€œIn my opinion, chessÂ has the potential to reach and engage a much broader audience than what weÂ see today,” said Magnus Carlsen, the reigning World Champion. “To succeed with this, innovation, and most of all quality in theÂ production and transmission, are key elements.â€

The full information about the Championship Match broadcast andÂ subscription options is available at worldchess.com/nyc2016.

Livestream is the only comprehensive livestreaming solution, providing theÂ streaming platform, hardware, studio software, best-in-class support,Â production services, and analytics to any person or organization with theÂ desire to reach a global audience. Livestream is trusted by over 30,000Â customers, from local communities to global brands, and streams over six
million events a year.