OpenSim actives down but land area up this month

By: David Kariuki
With: 26 Comments

OpenSim’s public grids gained nearly 1,500 regions this month despite the summer season, but total active numbers were down by just over 1,700.

The biggest land gainer this month was Atek Grid with 703 new regions, followed by DigiWorldz with 495 regions, Discovery Grid with 384, OSgrid with 168 regions and Kitely with 164 regions.

There weren’t huge surprises in the loss of land area this month except with Virtual World Grid that lost a total of 424 standard regions. It was followed by Craft World with a loss of 82 regions, AllCity 51 regions, andÂ Sanctuary with 39.

Kitely was in the lead this month when it came to registering new users, adding 1,477 new people to its rolls. InWorldz was in second place with 1,166, followed by OSgrid with 468.

OpenSim is a free, open source virtual world platform thatâ€™s compatible with the Oculus Rift. It allows people with no technical skills to quickly and cheaply create virtual worlds, and then teleport to other virtual worlds. Those with technical skills can run OpenSim worlds on their own servers for free, while commercial hosting starts at less than $5 a region â€” compared to $300 a region for the same land in Second Life.

Active user counts often go down in the summer, and this month was a prime example. More than 70 grids reported declines in their active users, with the education-focused Eureka World down 509 users, the most of any grid.

Top 25 most popular grids this month:

Kitely now has 10,205 product listings in the Kitely MarketÂ  containing 19,400 product variations of which 14,645 are exportable. The market has delivered to 203 OpenSim grids to date. 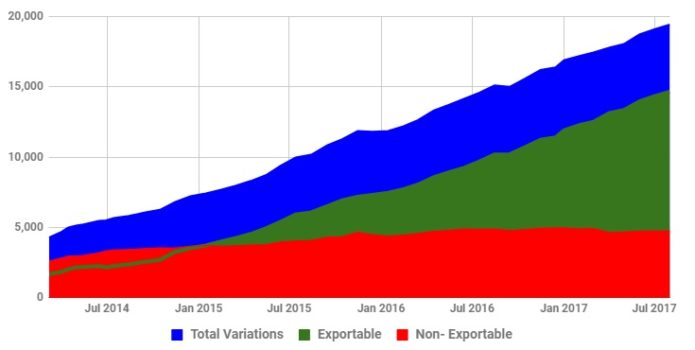 Ever since Kitely turned on the hypergrid export functionality, exportable content has been growing at a much faster rate than non-exportables, as merchants increasingly become comfortable to selling to the hypergrid.

VirTec vending platform recorded a slight decrease in the number of merchants from 55 last month to 49 this month and from $360 to $300 in dollar equivalents of transactions this month.

The volume of transactions in Gloebits crossed the 5,000 mark in July, an increase of 33 percent over June. The number of users also reached a new high of 936, which was an increase of 14 percent compared to last month.

Here is a full list of Gloebits apps partners.

Get some freebies at Arts Manhas

Arts Manhas, a shop on the Virtual Brasil 3D grid, is offering mesh male and female avatars and male and female clothing and hair and other freebies, sourced from OS Grid, Metropolis, AdachiÂ and all of freebie shops around OpenSim.

The sourcing and licensing information is a comfort to both purchasers and content creators.

There have been complaints recently about some freebie stores distributing content of unknown origin.

Grid owners should also ensure that the stores being promoted on their websites or social media are reliable and check and work with other store owners to check for license terms and provenances.

But the grid will retain its current in-world support staff, including greeters, mentors and hosts.

The new COO is Liz Harrington, also known as Sophia Paolino in-world, who was the grid director and director of marketing, according toÂ an announcement. She will be the contact person for all official news concerning both Island Oasis and Mystic Darkstone LLC.

“We have also assembled a team of both new and old personnel to make sure your experience while on the Island Oasis grid is the best that it can be,” said Cannon. “I want to thank Damean and Sugar Paolino for what they have created in Island Oasis, it is a sound foundation for us to build upon into the future.”

DreamWorld, an easy way to create a mini OpenSim grid on a home comptuer, has now been installed more than 1,500 times. Each of the installs comes with a default four-by-four variable-sized region, putting the total land area at about 24,000 regions, according to a post by owner Fred Beckhusen.

“Some will do less, many do much, much more,” Beckhusen told Hypergrid Business. “I have seen one sim running 45 var regions.”

Of those installs,Â 668 are hypergrid-enabled private mini-grids, he said.

You can read about my experience with DreamWorld here.

We also added Mare World, an adult grid that is also hypergrid-enabled.

Grids that have been suspended for more than two months will be marked as closed. If your grid isnâ€™t on the active grids list, and not on the suspended list, it may have beenÂ marked closed when it shouldnâ€™t be. Please let us know.

And if thereâ€™s a public grid weâ€™re not tracking, please email us atÂ [email protected]. Thereâ€™s no centralized way to find OpenSim grids, so if you donâ€™t tell us about it, and Google doesnâ€™t alert us, we wonâ€™t know about it.

By â€œpublic,â€ we mean grids that allow hypergrid visitors, or have a website where people can register for or request accounts.

In addition, if a grid wants to be included in the monthly stats report and the most active and largest grid lists, it needs to have a stats page that shows the number of unique 30-day logins, and the total number of regions on the grid. In order for the grid not to be undercounted, 30-day active users stat should include hypergrid visitors, and the land areaÂ should be in the form of standard region equivalents, square meters, or square kilometers.

The list below is a small subset of existing OpenSim grids. We are now tracking a total of 1,248 different publicly-accessible grids, 257 of which were active this month, andÂ 182 of which published their statistics.

The raw data for this monthâ€™s report is here. A list of all active grids is here. And here is a list of all the hypergrid-enabled grids and their hypergrid addresses, sorted by popularity. This is veryÂ useful if you are creating a hyperport.

You can see all the historical OpenSim statistics here, including polls and surveys, dating all the way back to 2009.

Below are the 40 largest grids by total land area, in terms of standard region equivalents.

Latest posts by David Kariuki (see all)
2017-08-15
Previous Post: AltspaceVR is not dead after all
Next Post: Educators make lemonade with Virtual Worlds