Social gatherings in a virtual world

By: Sara Payne
With: 0 Comments

Social gatherings in a virtual world?Â Some of you might ask what this means.

Compared to the regular event, the turn out was limited. However, it was the first time — and the first weekend — that people have been so restricted. There were more people signed up so future events will hopefully be better attended.

My degree studies are also using theÂ Fire and Ice grids facilities for similar reasons. One of the modules is in Sustainable Computing. Part of that topic area covers using computing to help the health of society. Virtual meetings not only cut down on the environmental costs of excess driving, but there’s also a financial benefit in fuel savings.

It was an emotional moment for me to see two different groups of my friends meeting for the first time, but I understand that the current social restrictions can and will be hard for many people. Using avatars may not be for everyone, but it is an excellent way to socialize.

These hard times inspired me to make the offer I did yesterday, for free regions for charitable organizations. If you run social gatherings in the real world which cannot happen due to COVID-19 restrictions and youâ€™re interested in running social gatherings in a virtual world — contact me.

The Fire and Ice grid is still only a small venture, so it will have to be on a first-come, first-served basis. Hopefully, this will give some the chance to get to together who might not otherwise be able to do so. I will be posting full details on the Fire and Ice Grid’s blog.

Virtual worlds can seem a little daunting for those unfamiliar with them. Among many of the hurdles is installing a viewer. In the age of Facebook, Twitter and other social media giants, most people are used to using a web browser or a mobile phone app.

The reality, though, is that the process of installing an OpenSim viewer takes less than five minutes. The other issue is the varied selection of viewers available. That selection for experienced users is fantastic. New users find the selection daunting, having nothing to base a decision on.

When helping new people to get started, I always recommend theÂ Firestorm Viewer.

The Firestorm viewer is perhaps the most complicated, so why suggest it to newbies? Support! The Firestorm viewer has a level of documentation not found in any other viewer. There is a wholeÂ Firestorm Wiki dedicated to explaining the viewers’ features. A lot of their guides are focused on SecondLife. However, 99 percent still applies to OpenSim worlds. And while the Firestorm team holds its lessons in SecondLife, the good news for everyone else is that they are on YouTube.

Moving away from the official support, Firestorm is by far the most widely used viewer in both OpenSim and SecondLife. What this means is if you ask for help, the chances are people will give you guidance that relates to Firestorm. A quick Google search for â€œFirestorm viewer tutorialsâ€ will bring up more results than you could wish for.

The second daunting choice which new users to OpenSim worlds face is â€œwhich grid, there are too many.â€ Once again, this divides new and experienced users. Experienced users love the choices on offer. For a new user, it all seems very complicated and daunting.

My advice comes from two different viewpoints. If you already have friends in one world, go there. Once you are familiar with the system, you can explore other options. However, if you have no friends in an OpenSim world yet, but are interested in one, contact the grid operator. Send them a message, via email or their support forms. If you like the way they communicate with you, they are probably an excellent grid to start using. You can always swap and change later if you wish to.

Here are some grids to start out with, all of which are hypergrid enabled — meaning that you can travel easily between any of them, and between any of hundreds of other OpenSim grids.

Commercial grids typically provide better support and, often, higher performance regions than those run by volunteers. You can rent land directly from the grid owners.

Non-profit grids are run by volunteers and are supported by donations, though some also rent out regions. They also allow people to run regions on their home computers and connect them for free, or for a small token donation.

Virtual worlds do not have to be complicated. Once you have the viewer installed and have connected to your world of choice, it is easy. And, compared to SecondLife, there is a lot of free content available.

If your grid is hypergrid-enabled — meaning that you can teleport from one grid to another as easily as to other locations on the same grid — then check out this list of freebie stores on the hypergrid. You can learn how to travel the hypergrid here. In addition, there is also a wide variety of content that you can download to your computer and then upload to your region on any grid at Outworldz., including more than a hundred full, pre-built regions.

If you want the land to build your own space on, the prices across all worlds are substantially cheaper than SecondLife, with an average of just $15 a month. Overall, the OpenSim grids are run by small companies and individuals. Grid owners tend to be enthusiasts themselves. What you get is someone who loves what they do, with an incentive to help you. Take that on board, use their website support process. If that is the feeling you get, then start your journey with them.

I am going to end this with a personal plug. My virtual world is called theÂ Fire and Ice Grid. I started in virtual worlds over fifteen years ago – in 2004. During that same time, I have been running a small local businessÂ in the real world. Opening the Fire and Ice grid is my way of combining my skill sets. I am very used to small local business mentality. Customer relations and support is the forefront of everything I do.

Remember, social isolation doesnâ€™t need to be anti-social — keep talking, however you do it. 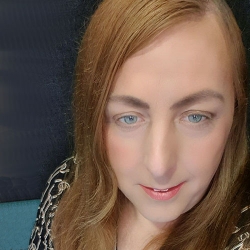 Sara Payne
Sara Payne is the owner and founder of the Fire and Ice Grid. She has been in virtual worlds and local business for over 15 years and is currently working on a master's in computer science.