By: Alex Korolov
In: Features, Most Popular, News, Popular, VR & AR
With: 0 Comments

Electronics giant Lenovo introduced a new set of augmented reality glasses this morning at the Consumer Electronics Show, held virtually this year. CES 2021 officially starts tomorrow, but Lenovo got a head start with its ThinkReality A3 smart glasses, which will be available to purchase later on this year.

What makes these glasses unique is that they put all the functionality of a bulky, high-end augmented reality headset like the Microsoft Hololens into something that looks more like a pair of sunglasses. 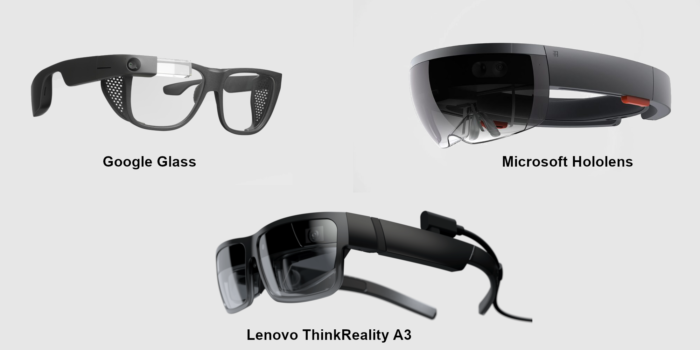 But there’s a lot more functionality, including dual fisheye cameras, six degrees of freedom tracking and two 1080-pixel displays that lets users see up to five virtual monitors at once.

By comparison, the Google Glass has just one tiny 640 by 360 pixel display just above the right eye and only one camera.

All three headsets are meant for enterprise users, with the Microsoft Hololens clocking in at $3,500 and the Google Glass at $1,000.Â  The Lenovo ThinkReality A3 is expected to come in somewhere between these two price points.

“If you want to have multiple monitors up and you want some privacy, you can put on these glasses and be able to see several virtual monitors in front of you that only you can see and that gives you an expanded workspace,” Nathan Pettyjohn, commercial AR/VR lead at Lenovo, toldÂ Hypergrid Business.

The ThinkReality A3 does have a major handicap — the high-end functionality requires processing and power, and the small size has no room for either. So the headset needs to be tethered to a power source and a computer, either a PC or a smartphone.

If it’s anything like its bigger cousin, the ThinkReality A6, you’ll be able to carry your mobile phone and extra battery on an optional belt clip for remote work.

The Google Glass has a built-in battery, but there have been complaints about short battery life.

But not having a built-in processor or battery does result in better wearability, and the company has put effort into user comfort.

“We have an ergonomic fit kit, which allows you to swap out the ends of the temples and the nose bridge, so weâ€™re striving to fit the 95th percentile of the population, which is a real challenge in a small compact device,” Mike Lohse, senior product manager for commercial AR/VR at Lenovo, toldÂ Hypergrid Business.Â

There’ll be two versions — a PC edition that can tether to a laptop or mobile workstation and works with Windows software and applications, and an industrial edition that will tether to certain Motorola smartphones.Â Lenovo owns Motorola, but Motorola’s market share in the mobile phone market is less than 3 percent.

The company is really pushing the PC version of the device, intended for people who work at their desks but don’t have room for as many monitors as they need, or require a more immersive experience.

“What we found is with a lot of the work from home experiences, people in their office environment donâ€™t necessarily have room for three monitors on their kitchen table, but we can expand that,” said Pettyjohn.

The Industrial Edition is intended to be used for hands-free AR supported tasks in remote work locations, such as on factory floors, retail spaces, and other industrial environments.

It’ll work on Lenovo’s ThinkReality software platform, a cloud-agnostic ecosystem of hardware and software solutions for enterprise use.

Other devices like Lenovo’s ThinkReality A6 mixed reality headset, which was released in 2019, run on the same platform.