The course, available to fourth-year computing students, will cover the design and development of 3D virtual worlds, using the OpenSim and Second Life platforms.

Creative computing students at Glasgow Caledonian University in Scotland will learn to install, maintain, administer, and interconnect open source virtual worlds in an effort to meet the demand for virtual world service providers. 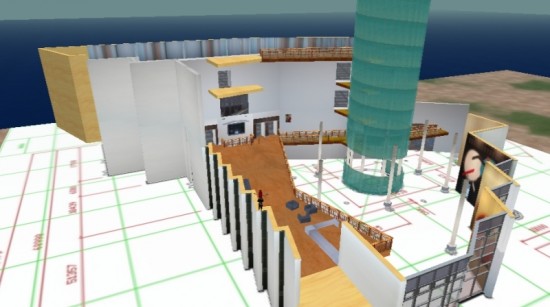 “So far every student involved in one of our projects has been head hunted and found a paid job involving their Second Life skills,â€ said Ferdinand Francino, who was hired by the school a year-and-a-half ago to set up a virtual university for stay-at-home students to engage in their studies.

Francinoâ€™s work started in Second Life, but recently an OpenSim and hypergrid technology module was approved as part of a larger creative computing course. Francino said the newly-approved module will take students from being Second Life solutions providers to being more complete virtual world service providers.

â€œOpenSimulator and hypergrid technology will allow for a metaverse of interconnected virtual worlds, exactly like the World Wide Web,â€ Francino told Hypergrid Business.

There will be a growing need for all kinds of virtual world skills, just like the emergence of the internet spawned the need for web designers and internet service providers, and the course aims to directly prepare students with these skills, he said.

Before the module was approved students could only learn about Second Life, and only in a self-paced workshop without set targets. Francino set up the workshop so people could informally walk in, explore building, scripting, and animation in Second Life, see what they liked, and receive help developing their skills.

â€œMany universities and corporate entities are already using virtual worlds, and the number of skilled people can barely keep up with the demand â€“ I get at least one job offer at every academic conference I go to,â€ said Francino. â€œI thought this called for the training of skilled individuals in a recognized, official module.”