We all live in a virtual world

Mike Treder, the managing director of the Institute for Ethics and Emerging Technologies, recently asked a loaded question:

If you could live in a world that was just the way you wanted it to be, with specifications youâ€™d chosen, customized and personalized to meet your every need and fulfill your fondest desires, would you spend all your time there? Or would you prefer to stay here, in the real world?

I assume that, by “virtual world,” Treder means a world like Second Life where people can inhabit a world that they create in cooperation with other people. They use objects that they create or that other people create. There is no pain or hunger other than the game-style health meters which people voluntarily submit to — or the emotional pain caused by other people in the world. And there are infinite resources — people can have anything they want.

But, in fact, we’re all closer to that world than we realize.

For example, I’m typing this blog while sitting in a chair, at a desk, in front of a computer. All of these objects have been created by other peopleÂ  — they don’t exist in nature. I don’t feel the heat or cold of the weather except when I choose to, since I’ve got air conditioning pretty much everywhere I go. I don’t feel hunger, except when I’m on a diet.

A lot of the world already lives much like I do and many of those who don’t are kept from it by political factors — by other people. It’s not a lack of stuff that keeps us from getting food to famine victims — it’s local governments or war lords that get in the way.

If I was living a few thousands of years ago, before civilization came along, I’d be living a hand-to-mouth existence. My life would be marked by scarcity of resources — food, shelter, clothing, personal adornments. 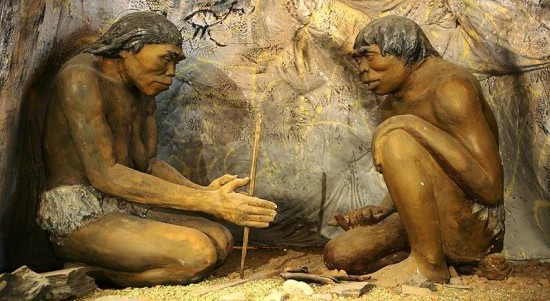 Today, by comparison, we live in a time of plenty.

Any of us could, potentially, have anything we wanted. There’s more than enough to go around. The main thing keeping us from getting what we want is other people, who have decided not to let us have it because we don’t have enough money to pay them for it, or because we don’t have the right passports, or some other equally trivial reason. Trivial, that is, from a caveman’s perspective.

Today, we control our environment to a degree that would be unbelievable to someone who lived a thousand years ago — or even a hundred years ago. Every disease or broken limb or pregnancy that came along would be a potential death sentence. Today, instead of stoically suffering parasites, rashes, fleas, and other scourges of the past, we use products — made by other people — that let us live pestilence-free.

And though we can’t fully control the weather — yet — we do use satellite weather reports to help us avoid hurricanes and tornadoes and buy generators in case a snowstorm cuts power to our houses.

I personally have enough cans stockpiled in my pantry to eat for a couple of months in case of a natural disaster.

In real real life, we’re at the mercy of the weather. A single dry season or a plague of locusts can cause an entire tribe to die out of hunger.

In real life, if there’s a drought in one part of the world, there’s a storm in another, and, at the end of the season, still plenty of food to feed everybody. People only go hungry when society doesn’t respond quickly enough to their needs — or they’re on a diet.

In virtual life, of course, nobody goes hungry at all unless they decide to play a game that requires a health meter.

In real real life, we have to pick fleas and ticks off our bodies by hand.

In real life, we throw our clothes in the laundry and spray some flea killer around and the fleas are gone.

In virtual life, if we have fleas at all, they’re virtual pets and we entertain ourselves by teaching them tricks, breeding them, and trading them at virtual flea fairs.

In real real life, if you want to go live on the beach, you might have to trek thousands of miles on foot, cross-country — then battle local residents for a spot of your own.

In real life, we take a plane and have a week-long vacation in a luxury beach-front hotel that we saved up for by working the previous year.

In virtual life, we pay a few dollars a month for an island home that we can spend as much time in as we want.

You can have anything you want in a virtual world, as long as you either make it yourself, or have the virtual currency to buy it from someone else. It is not that different from real life today.

And real life and virtual life are getting more and more similar.

As emerging economies develop and birth rates drop around the world we’ll soon come to a time where everyone on the planet is living a style that would be considered a millionaire lifestyle today.

After all, each one of us reading this has unlimited entertainment at our disposal. More food than we could eat. Medical care available around the clock (even if it is just an inner-city emergency room). Access to all the world’s great literature at our fingertips. A couple of hundred years ago, all that would only have been available only for members of the nobility.

We can’t stop earthquakes or hurricanes yet, or cure cancer or keep people from dying of old age, but I’m pretty confident that there will be significant progress on these issues during my life time, and certainly during my kids’ lifetimes.

A virtual world is no different. Even if you’re living in a castle on a tropical island, the guy next door will have a nicer castle, and a bigger island, and you’ll still be as happy or unhappy as you are in real life.

The main question is: how much of your happiness or unhappiness is caused by other people, and how much by the natural environment?

If we isolate ourselves completely from other people, and go live by ourselves in the woods, then we’ll be able to see what a truly “real” life feels like.

Meanwhile, the virtual world gets more and more real all the time. The graphics get better. The sound gets clearer. Eventually, we might add other sensory inputs, like touch or smell or taste and then we won’t be able to tell them apart.

The one big difference that will remain between virtual and real worlds, however, is that of land. There are only so many lush tropical islands to go around, and even if we’re all millionaires, the billionaires that got there ahead of us aren’t going to give their islands up without a struggle. We’d have to get jobs as their personal servants in order to live in island paradises — and how much fun is that?

In a virtual world, however, there are no constraints on land. In OpenSim, land prices have recently dropped to below $1 an acre (see OpenSim prices drop to $10 per region) and will probably continue to plummet as computers get faster and storage gets cheaper.

Of course, this will change once we start building space-based habitats and terraforming other planets