A week ago, 3rd Rock Grid program director Zinnia Frenzy contacted Hypergrid Business to let us know that the prices listed in our vendor directory had changed.

Plus, there’s a special offer for new residents, called the First Land Program. For $1 for the first month, new residents can get an 8,000-prim region — and then pay just $8 a month after that for as long as they want to keep that region.

3rd Rock Grid is one of the oldest OpenSim grids, known for its music festivals. A closed grid for most of its existence, it turned on hypergrid connectivity a year ago and saw a dramatic and immediate spike in both regions and usage. Traffic and regions then fell when founder Terry Ford left to start his own grid, DigiWorldz. Growth seems to have picked up again recently, however, as the grid restructured itself as a Dutch non-profit.

3rd Rock Grid has also historically scored well for its community, and did so again in this year’s grid survey.

And speaking of DigiWorldz, the grid has also brought back its First Land Program. When the grid first launched earlier this spring, it offered 15,000-prim regions for $8 each, but it was only a limited-time offer.

Features include OAR region exports and uploads, IAR inventory exports and uploads, 30 days’ worth of automatic backups, vehicle border crossings, a Web-based interface that region owners can use to restart their regions, and voice support for up to 50 simultaneous users.

DigiWorldz also had the fastest launchÂ of any grid in OpenSim history. As you can see in the chart below, it took DigiWorldz just five months to hit the 1,000 active user mark, during which time it also grew to a size of 981 regions. The closest contender was YrGrid, which took three months to reach 1,000 users but was not able to maintain that size for more than a month, while DigiWorldz continued to stay above 1,000 actives. In addition, YRGrid only grew toÂ 63 regions during that time. Other dramatic launches include Avination, back in 2010, and the Great Canadian Grid, which launched last year.

Craft World has lowered the price of its standard 10,000-prim region from 12 Euros to 7 Euros per month, the grid announced yesterday.

The grid has discontinued its 3,000-prim microregions and their owners are automatically upgraded to the standard regions for the same price.

In addition, educators will be able to get 25,000-prim regions at a discount, for 7 Euros a month each. See the full land page here.

Finally, Tangle Grid is offering a holiday sale on its regions. A 15,000-prim region is just $5 per month until the end of the year, while a 20,000-prim 2 by 2 varregion is $15 per month. Once rented, the region prices will not go up after the sale ends, butÂ will remain in place for the life of the region. 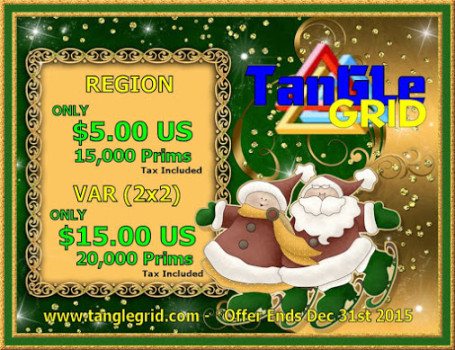 Is there another grid that recently dropped its land prices or is offering special deals for the holidays? Email me at [email protected] or let us know in the comments below.