Survey: Slow erosion of educators from Second Life to OpenSim

In March, I asked educators on the SLED and EDUCAUSE Virtual Worlds lists to tell me how their ownership of land in virtual worlds compares to their holdings a year ago.

Here are the results.

I had expected a larger exodus from Second Life, but the survey design made it hard, without biasing its design, to factor in the two-year pricing Linden Lab offered nonprofits and educational institutions.

The two-year reduced tier may have swayed many colleagues with ongoing projects that are hard to transplant to stay in Second Life. 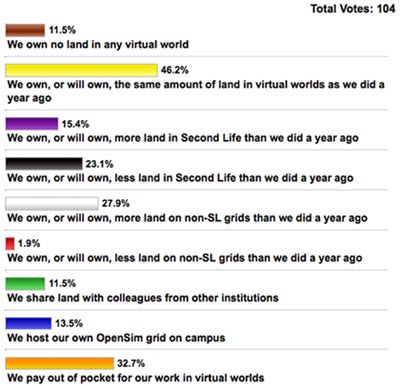 A difference of 8 percentÂ between contraction and expansion might sound alarming to a company in other contexts. I could imagine executives losing sleep if their aggregate sales figures showed a similar change: more companies in the prior calendar year expanding their trucking fleets with more Chevy trucks than Fords, or more firms supplying their employees with Windows 7 rather than Blackberry smart phones.

For virtual-world users, however, the choices are not either-or: it is quite possible to rent server space from several providers to enable different projects. The survey respondents could, for example, have cut land holdings a little in SL, while renting server space for an OpenSim installation (or hosting it on campus). My own response would include “own less land in Second Life” (our campus presence has gone from a full island to my office, on a 512m mainland plot for which I pay no tier) and “own more land in non-SL grids” (I rent a sim in Jokaydia Grid).

With 27.9 percentÂ noting more ownership of non-SL real estate than a had been the case a year ago, versus 1.9 percentÂ saying less, educators are clearly trying other grids, perhaps as secondary experiments alongside work done in Second Life.

Faculty may simply be hedging their bets in case further changes from Linden Lab prove unsuitable to their needs, or they may be staking an early claim if OpenSim grids evolve in ways that make them match or exceed Second Life’s stability and quality of content.

One telling statistic: nearly a third of respondents pay out of pocket for their work in virtual worlds. That makes any further increases to tier difficult. For those paying the non-discounted tier in Second Life, it will be interesting to look again in a year, to see how many educators have changed their plans or stayed with Linden Lab’s grid.

Public knowledge of OpenSim has certainly grown; a year ago at the VWER meetings, we had to explain when OpenSim is. Now folks know, even if they have not spent much time on a non-SL grid. In time, more will travel, and their experiences with grids not quite as evolved as Second Life’s may influence future survey results.

A different survey might ask respondents if they pay more, less, or the same tier as a year ago, or the size of their Second LifeÂ and other holdings.

Moreover, another survey might break out the sorts of non-Second LifeÂ worlds that educators frequent. InWorldz, for instance, offers stability and the presence of many content creators; it is very different from smaller OpenSim grids with hypergrid access and mostly DIY content.

I hope, however, to administer the same survey a year from now. These numbers could be very different, and one survey cannot reveal a trend.

(This article first appeared on In a Strange Land and is reprinted with permission.)

Joe Essid
Joe Essid directs the Writing Center at the University of Richmond, where he teaches courses in the departments of English as well as Rhetoric & Communication Studies. He holds a PhD in American Literature, with a specialization in the History of Technology, from Indiana University. As Ignatius, Joe can be found wandering Second Life or, as Iggy Strangeland, in Open Sim grids. He writes for Prim Perfect about grids beyond SL. He has published several articles about pedagogically effective ways to teach with technology in writing-intensive classrooms. He also publishes short work about gardening, history of technology, and sustainability. Ever a geek, Joe designs and plays old paper-and-dice roleplaying games. His at-times snarky blog, "In a Strange Land," combines these interests from Joe's perspective as neo-luddite who rides a bike, refuses to use a cell phone, works on a farm, yet thinks avatars provide an ecologically sustainable way of communicating and building immersive simulations.

Latest posts by Joe Essid (see all)
2011-04-06
Previous Post: Does Linden Lab put its economy first?
Next Post: 19 Definitions of a Virtual Event